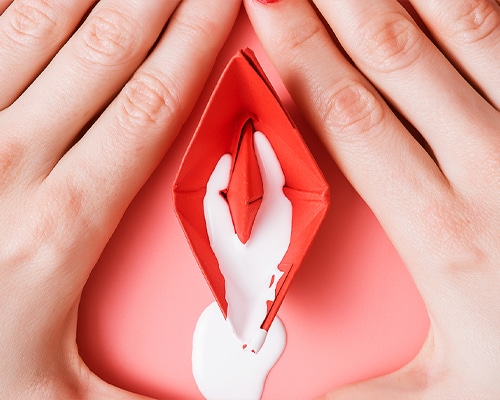 Going to a gynecological appointment periodically is one of the necessary cares for a woman’s health. But in everyday life, it is important to pay attention to signs that may indicate an abnormal condition.

For example, a vaginal discharge can be natural, but it can also indicate some other pathological condition.

When accompanied by any other symptom, it can signal the presence of inflammation, uterine disease or even a possible pregnancy.

In the following article, we will talk about a specific type of discharge, pinkish, which is a vaginal secretion with the presence of blood in a very small amount.

Read on to understand the possible causes!

What can the pinkish discharge be? 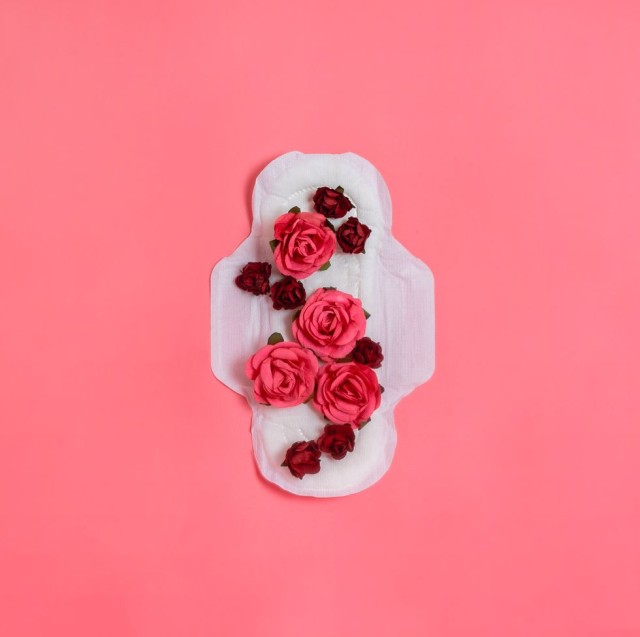 The pinkish discharge can have different causes, but it is very associated with the beginning of a pregnancy, and it can be a nidation, that is, the bleeding that occurs when the fertilized egg implants in the uterine wall. It can also be related to the use of medications, hormonal changes, injuries, escape from menstruation and illnesses.

First, it is important to understand that discharge is a natural thing in a woman’s body.

It is mucus produced by glands in the genital region. Its function is to expel dead cells, protect the woman’s uterus from bacteria and provide lubrication to the vaginal canal, important so that there is no pain during intercourse with penetration.

When it is a white or clear discharge without a strong smell, itching, pain, burning or any other symptom, it is considered normal.

This is not the case with pinkish discharge, which represents the presence of blood in the mucus. It can be a lighter or more intense pink, depending on how much blood is expelled with it.

In this case, the main causes are:

Changes in hormone levels can interfere with a woman’s menstrual cycle and vaginal discharge. Although not the most common cause of pinkish discharge, it may be one of the associated factors.

For example, there are women who notice a little pink bleeding in some cycles during the ovulation period.

Ovarian cysts are small pockets of fluid that form in the ovaries. They are not always a concern, as they can go away on their own—without treatment. However, when they persist, it is important to consult specialists and assess the need to treat.

The condition usually does not cause significant symptoms, but can trigger cramps, pain and bleeding, and there are signs that may be related, such as irregular menstruation and severe cramps. 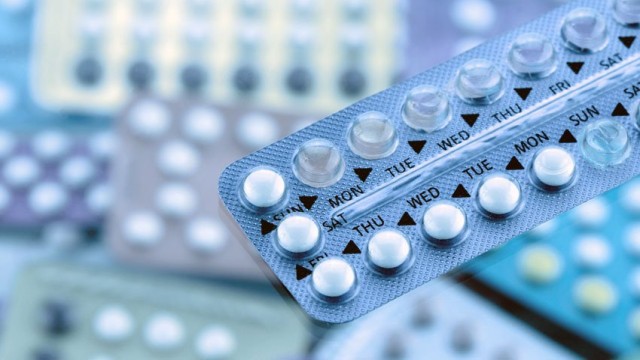 Women who use contraceptives with a break may have, due to hormonal changes, an escape before the expected period.

It is more common to occur in those who are starting to take the drug, as the body is still getting used to the hormonal doses received.

In these cases, a brown discharge is more common, but a redder or pinker discharge may occur.

When a fertilized egg implants in the uterine wall, small pink bleeding may occur. This bleeding is called nidation and is usually the first sign of pregnancy.

It often goes unnoticed because it is confused with a period. Therefore, the woman who wants to get pregnant needs to be aware of the symptoms and know how to recognize the nidation.

Pink discharge can also be a symptom of ectopic pregnancy, this is when the egg is fertilized outside the uterus.

Nidation: What is it, symptoms and when it occurs

Infections caused by bacteria, viruses and fungi can also cause pink bleeding. Normally, in these cases, a discharge is not the only sign. It is also common the presence of a bad smell, pain, itching and other symptoms.

Other causes involve possible diseases in the uterine region, menopause and also gynecological exams, which can cause injury if performed incorrectly by the professional.

A pink discharge after intercourse may indicate that there has been some injury or trauma to the birth canal, causing a blood vessel to rupture and leading to minor bleeding.

It is important to always be aware of possible lesions in the cervix when there is bleeding during or shortly after sexual intercourse.

Pinkish discharge with odor (strong smell): what can it be?

A discharge, pink or other color, accompanied by a strong odor may indicate the presence of a more serious health problem and requires an investigation with a doctor. It can be a sign of an infection, including sexually transmitted infections (chlamydia and gonorrhea, for example).

In these cases, in addition to the bad smell, other symptoms may appear, such as pain, itching and burning.

Light pink discharge: is it normal?

In general, yes. Usually, the occurrence of light pink discharge can be related to small menstrual leaks (then the blood mixes with the vaginal mucus, making it pink) or small lesions in the vaginal mucosa after intercourse.

It is also possible that the pink discharge is related to pregnancy, but it is important to pay attention to the duration and intensity of this discharge.

Hormonal changes may be related as well. In this case, there is no reason for concern, since the condition tends to be common and related to stress, diet and even the use of contraceptives.

After intercourse with penetration, pink discharge is possible. This is because, during penetration, small lesions in the vaginal mucosa can occur, leading to microbleeding.

It is important for the woman to note how often this occurs and whether the amount of bleeding becomes stronger (red). In these cases, it is important to seek gynecological advice.

When it occurs promptly after intercourse, there is usually no cause for concern. But if it is constant, it could be a sign of poor lubrication or other problems.

It is worth remembering that pain, discomfort or injuries are never normal during sexual intercourse, and in these cases, gynecological consultations are necessary.

Pinkish discharge taking birth control: what can it be?

The use of contraceptives can cause changes in the natural discharge. At the beginning of use, noticing the presence of pinkish discharge may be more common as it affects the hormonal rate.

In addition, it is common that until the organism adapts, small escape bleeds occur, so that the vaginal mucus mixes with the blood and turns pink. In addition, changing the contraceptive or not using it correctly (forgetting doses) can be the source of the pink discharge.

Is pinkish discharge before or after menstruation normal? 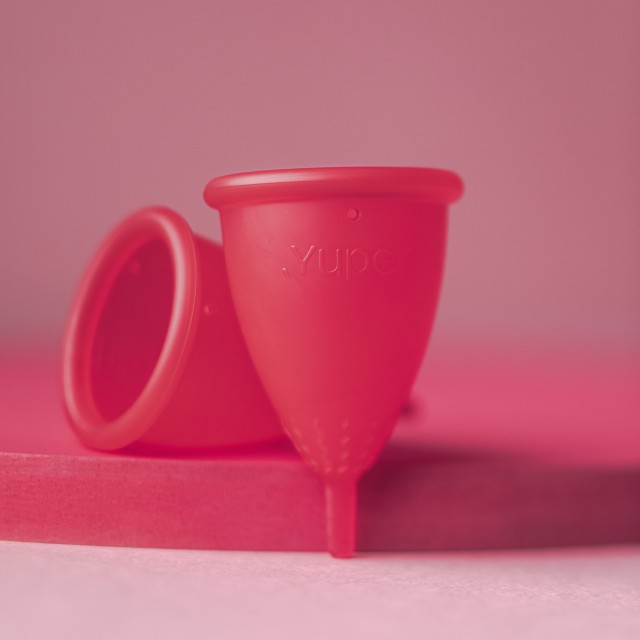 It depends. Before menstruation, which spontaneously ceases and is not followed by the usual menstrual flow, it may be a sign of pregnancy, in the case of nidation.

However, it may also just be an escape from menstruation caused by hormonal changes. If pregnancy is suspected, it is important to take a pharmacy or blood test.

When you observe the discharge after the end of menstruation, the reasons may be different. One of them is the possibility of being just blood remnants from the cycle.

In these cases, the vaginal discharge may be pink, but more often it is closer to brown.

After menstruation, because the woman is far from the fertile period, a pink bleed is less likely to be a nidation. But it is important that women who do not want to get pregnant take other precautions in addition to relying on the table.

This is because hormonal changes can occur and the egg is released before its time, increasing the chances of a pregnancy.

Anyway, in the face of a pinkish discharge, it is important to be aware of other signs and seek medical attention if you suspect a disease or pregnancy.

A pink discharge is one of the first signs of pregnancy. It is actually an escape that usually lasts 2-3 days, which indicates that the egg has been fertilized by a sperm, has reached the uterus and is implanting into the uterine wall.

Therefore, it occurs up to 3 days after intercourse, accompanying in some cases the presence of colic.

These cramps are normal and pass, in most cases, without the need for drug treatment.

The pink color of the discharge is due to the presence of blood in the secretion, a common escape that happens at the time of nesting, right after the arrival of the fertilized egg in the uterus.

In addition to being a sign of pregnancy, pink discharge can also occur during a more advanced pregnancy, sometimes normal due to the rupture of blood vessels while the placenta develops and invades the muscle layer of the uterus.

If in the first case it is a normal condition, in the latter case it is necessary to be extra careful, as it can mean a miscarriage.

It is important to observe the pattern of duration and amount of bleeding to distinguish normality or miscarriage. Physiological bleeding usually occurs in a few days and a small amount per day (not enough to fill a pad).

During the first 3 months of pregnancy, a woman’s body shows a significant increase in blood flow. Normally, the amount of blood in the body is 4.5 liters.

During pregnancy, it can reach 6.7 liters. As a result, even physical exertion and sexual intercourse can result in the rupture of a small blood vessel, causing pink or brown tones in vaginal secretions.

To investigate whether the bleeding is a nidation and confirm the pregnancy, it is important for the woman to recognize other symptoms of pregnancy and get tested.

With more advanced pregnancy, any bleeding should be evaluated by the obstetrician.

How long can a vaginal discharge last? 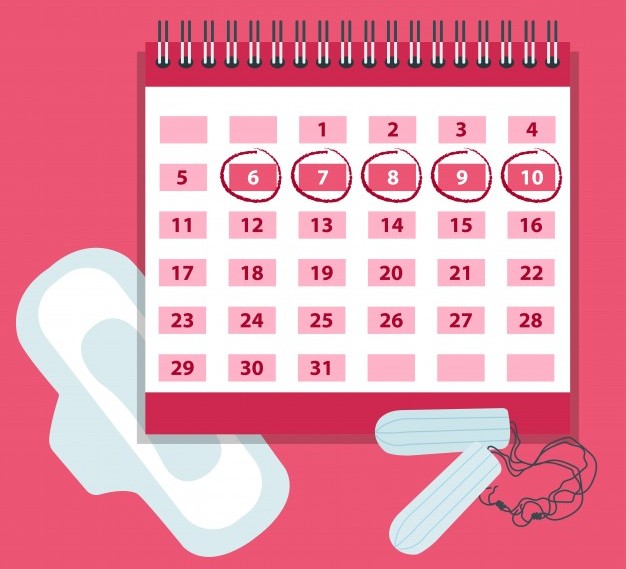 In the case of a pink discharge caused by pregnancy (nidation), the duration is approximately 2-3 days. This is a case that you can estimate the duration, but the duration depends on the cause.

The ideal is to seek medical help even before the pinkish discharge stops, as it may be a more serious condition.

If, in addition to the discharge, there are other symptoms, such as colic, itching, strong odor or burning, the urgency for a diagnosis is even greater.

A pink discharge can be the first sign of pregnancy. Therefore, women who want to become pregnant need to be aware of the symptom.

However, even if it is a small loss of blood, it can represent something more serious and needs to be investigated.

Therefore, when noticing this type of discharge, if it is persistent and accompanied by other symptoms, the woman should seek help from a gynecologist.

31 weeks of gestation: what happens in this gestational phase?

Delayed menstruation (days or months): understand what it can be

Gynecological Ointment: what is it for? See some options