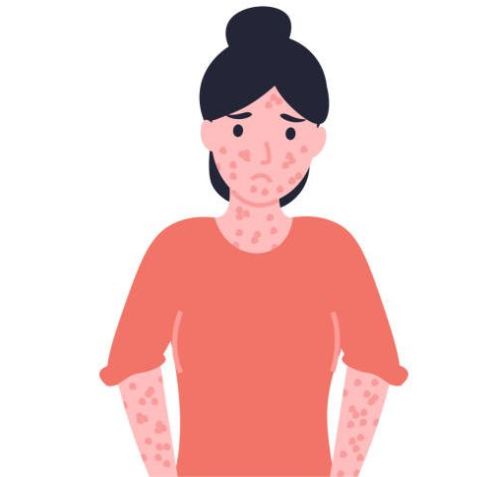 Scabies is a problem, initially, very much associated with pets. Dogs and cats, especially abandoned ones, are often affected by the skin disease.

However, the condition also affects humans, although predominantly by another type of mite.

Although less common, one type of mite can also affect other species. In other words, taking care of pets is also taking care of their owners’ health.

In the International Classification of Diseases _ ICD 10, scabies is listed under the code B86 .

In this article you will find the following information:

Scabies, also called scabies, is a contagious skin disease caused by a parasite, the mite Sarcoptes scabiei, which has kennel and homini variants. The first predominantly affects animals, the second humans.

When it comes into contact with the skin, it lodges in the host and reproduces there.

Hominis mites do not live more than 3 days away from human skin, because they feed on skin proteins, mainly keratin. But once lodged in the skin, they can live for up to two months.

It can affect individuals of any sex and age group, but it is more common in children. It is one of the three most common skin diseases in this age group, along with ringworm and bacterial infections.

It can also be located anywhere on the body, but the most common areas are between the fingers and toes, around the wrists and elbows, in the armpits, in the crease of the knees and around the waist.

In young children and infants, it is more common for the disease to proliferate in the head, neck and palm regions of the hands.

The disease has nothing to do with cleanliness, as it proliferates mainly in areas without access to water, in tropical climates and in areas with large crowds.

Since 2010, scabies has affected approximately 100 million people (1.5% of the world’s population).

Is human scab the same as animal scab?

Despite the same name, the mange that develops in animals, known as sarcoptic mange, is different from that developed in humans because the mites in both are slightly different.

However, in some cases, human infestation by the kennel-type mite may occur. The person becomes a transient host as soon as the agent does not survive long on human skin.

In other words, although less common and limited, scabies can be a zoonosis, and it can pass from animals to humans.

Scabies is caused by a mite, Sarcoptes scabiei, which lodges under the host’s skin. Getting in contact with infected people or surfaces and objects is the route of contagion.

After the mite reaches human skin, it starts to reproduce. The female penetrates the skin tissue, forming a kind of tunnel to deposit her eggs.

After the eggs form and hatch, the hatched mites return to the tissue surface and spread to other areas of the body.

As they move, they leave their feces behind, which create linear lesions in the skin.

The disease is the result of an allergic reaction against the mite, its eggs and feces, and it causes severe itching and rashes like rashes.

How is human scabies transmitted?

Scabies is highly contagious and is spread through physical contact between people or through contaminated objects such as sheets.

The most common cases are family members who live in the same house or during sexual activity.

It can also be easily transmitted in places with a large crowd, the most common examples being: army, homes for the elderly, crèches, prisons and childcare institutions.

The contact that children and teenagers have at school is usually not enough to transmit scabies, but there can still be risks.

It is called crusted scabies when mites proliferate in large quantities throughout the body, and this is the most critical form of the disease and is usually related to immunosuppression.

In this case, transmission is even more likely, and may occur in brief contacts, such as shaking hands or even through clothing, objects and bedding.

Scabies can also be passed from one individual to another even if the host has not yet developed any symptoms of the disease.

There are no specific risk factors for the disease, as it can affect individuals of any age and gender, but it is more common to develop in children and babies.

Individuals with immunodeficiency are also more susceptible to scabies.

The most common signs and symptoms of scabies are:

The most common areas for papules to appear are:

A more severe form of scabies, it develops when the host’s organism has a weak immune system, usually due to some medical condition or old age.

In this case, the most common symptoms are scattered scabs on the skin, which tend to be hard, gray in appearance, and break easily when touched.

They do not always itch and can appear in more than one region of the body, such as the scalp, back and feet.

Because it develops in individuals with a low immune system, crusted scabies multiplies more easily and at a higher rate.

Scabies in babies and children

When it occurs in children, the symptoms are the same, itching and skin lesions such as dots or balls. But the most common areas of appearance of these lesions are:

Babies when they develop the disease are usually very irritable, sleepless and have a poor appetite. Children are also irritable and itching can keep them awake at night.

The diagnosis of scabies can be made by a dermatologist through a physical examination, where he or she will inspect the affected areas.

If there are still no signs of the disease, the doctor may take a small sample of the skin, which will be examined to confirm the presence of the bacteria or their eggs.

Other diseases can also be associated with itching, such as dermatitis and impetigo, so medical advice is required.

What is the treatment for human scabies?

Treatment should be aimed at eliminating symptoms and routes of transmission. In other words, in addition to medicines, it is necessary to clean the environments and eliminate possible sources of mites.

The treatment of the disease is simple and basically done through medications, some creams and lotions that are dermatologically tested, with the objective of ending the infestation by the parasite.

Generally, the patient applies the medicine over the body after bathing, for a few days, leaving it to act naturally during the night and removing it the next day.

It is important that the application is repeated after 7 days, to combat the mites from the eggs that had not yet hatched during the first application.

The environments and objects must be properly sanitized, eliminating the mites present. Periodic washing of utensils, vases and sheets and blankets is essential.

Especially in shared homes or shared living environments, such as nursing homes or schools, the exchange of bed linen, towels and pillowcases is very important.

If there are pets, care for the animals must also be constant. Therefore, the cleaning of their utensils is also essential.

Medications will be prescribed by your dermatologist and some of them may be recommended for individuals who have been in contact with the patient.

Usually, medications are for topical use, that is, applied to the surface of the skin, in the affected region. But there are also medicines in pills, that is, taken orally.

The choice depends on the doctor’s or physician’s assessment, which can be:

Among the systemic remedies, per pill, there are:

Soaps have the same principle as topical medications, as they are formulated with substances that fight the mite.

Its use must follow the doctor’s or physician’s recommendations. Among the options are:

Benzyl benzoate (such as Miticoçan and Sanasar).

Home remedies and treatments for scabies can facilitate and accelerate the improvement of the condition.

But it is worth remembering that they are not a substitute for medical treatment. Therefore, they are only allies in the best evolution of the patient.

Taking hot baths 2-3 times a day, with shampoo and neutral soap, can prevent the growth of mites.

There are also ways to help relieve itchiness, such as:

Consult your doctor if symptoms persist even after four weeks of treatment.

When treatment starts, it is recommended:

Even after the parasite is eradicated, itching can persist for some time. To relieve the itching, the patient can take some steps:

The main complication can occur through itching. Scratching the lesions can cause sores, which allows other bacteria or viruses to enter the body, causing a bacterial infection.

As for crusted scabies, its complication is due to the treatment, which can be more complicated and time-consuming.

How to prevent scabies?

The only way to prevent scabies is to avoid direct or intimate contact with an individual infected with the parasite.

To prevent re-infestation, wash and dry all personal, bed and bath clothes that the patient has had contact with at the warmest level the machine allows.

What cannot be washed must be vacuumed. That way, bacteria that may have been on any of these objects will be eliminated.

As in humans, mange in dogs causes a lot of itchiness and sores on the surface of the skin. It is caused by the kennel mite. In animals, however, there are other types of scabies that can affect them.

It is an infection that only affects the pets’ ears. Therefore, the condition is restricted to dogs and cats only. In general, it causes inflammation in the region, which can cause intense itching.

This type affects puppies early in life, after giving birth or during breastfeeding. The Demodex canis mite is transmitted and lodges in the animal’s fur, but unlike the others, black scab does not itch in most cases.

Only if there is an immunological low or other conditions that favor the manifestation do symptoms appear.

This makes many people not even suspect that the pet is infected.

Although there is no cure, the condition is not contagious to humans.

How long to cure scabies?

After starting the medication, for safety, the ideal is to remain isolated for about 24h to 48h, avoiding transmission of the mite. After that time, the lesions and other symptoms may persist for a few more days, but it is a phase of recovery and healing. On average, in 14 days the signals disappear.

How do you know if you have scabies?

Scabies, or scabies, manifests quite characteristic rashes and skin lesions, appearing mainly on the hands, wrists, armpits, feet, knees, waist and buttocks. A healthcare professional will be able to identify it easily. Itching and skin irritation are also signs of infection.

It depends on the medication and complementary treatment. On average, if the environment is well sterilized and the mites are eliminated, in about 10 to 21 days the medicine is finished and the skin symptoms improve. The ideal is to follow medical guidelines.

Is vinegar good for mange in people?

Vinegar is widely used in various treatments and homemade recipes. It can generally be used in the preparation of cleaning substances. For example, mixing water and vinegar to sanitize surfaces, sofas or fabrics.

However, there are several products specially developed for this that can have good results and not leave that characteristic smell of vinegar.

On the skin, whether of humans or animals, the recommendation is to use only medicated or specific products for the treatment. Thus, the risk of complications or skin lesions is avoided.

Scabies is a communicable but easy-to-treat disease.